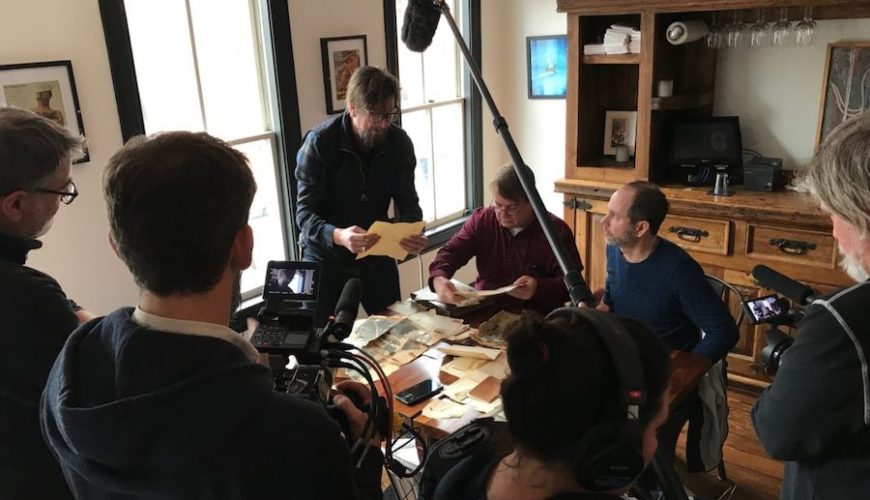 Legend has it that in the late 1920s, brothers Harry and Sterling Uhler and fellow amateur scientist (and recent Poly grad) Robert Condit built an actual rocket in a western Hampden garage. The primitive spacecraft included a 50-gallon gas tank and steel pipes for rocket tubes, and a sidewalk serving as a launchpad to send them off on their journey—anywhere from 24 to 162 million miles away–from Earth to Venus.

The likelihood that this space mission, which inspired Geoff Danek and Brian Carey to open their Hampden bar and restaurant Rocket to Venus in December 2006, actually happened would seem minuscule to anyone outside of Baltimore, Danek says—that is, unless you know Baltimore.

“Baltimore’s so quirky and weird that anywhere else in America, people would be like oh my gosh! In Baltimore, people are like, Yeah, sounds about right, what’s the big deal?”

And it seems believable enough for the era, he says. “The spirit, the time–1928, 1929–there just was like this pioneering spirit that anything was possible.”

Danek discovered the legend while living on the same property where the men supposedly embarked on their space-engineering mission. Over the years, he and Carey have grown obsessed with finding the ship–so much so that they’re now making a documentary about what’s the seemingly endless search for it.

And if they can’t ultimately locate it, Danek and Carey plan to replicate the very spaceship they’re chasing down by building it with new materials.

For several years now, Danek and Carey have collaborated with their childhood friend, Emmy-winning cinematographer John Benam, and producer Daphne Glover, editor Todd Evans and writer Robert Ferrier to film their journey, working collectively under the production firm Urban Goat Films. The effort has led them to relatives of the Uhlers and Condit who’ve passed on new leads.

“Obviously what initially intrigued us all is it’s such an optimistic and fun story about a time when people just thought anything was possible,” Glover said.

They’ve recently received some financing in the form of a $25,000 grant from Johns Hopkins University’s Saul Zaentz Innovation Fund. Glover said that’s helped them to market and build an audience for the film, and will let them bring on an associate producer in recent MICA graduate Samantha Mitchell.

Ferrier said he’s enjoyed working with Danek and Carey, particularly capturing their candid reactions to new findings as the search deepens. “They just are approaching this story with this openness, and that sort of draws you in as a viewer. We’re just really fortunate to be able to tell the story.”

All of their work thus far has been filmed in Baltimore—you can watch a preview in the trailer below—but that’s not where this tale ends.

“The idea is that the rocket left Baltimore in the end of summer of 1928,” after which Condit brought it down to Miami Beach, Danek says. They learned this from 90-year-old invoices they found from a shipping firm, as well as documents shared by a great nephew of Condit’s, who handed them a briefcase with 50 or so letters from strangers who wrote Condit asking to join him on his space journey.

Now, Urban Goat Films is raising money for a trip to hopefully finish their research, or if that dead-ends, to acquire all of the raw materials to assemble a new, old spacecraft.

A crowdfunding campaign launched Thursday seeks $30,000 to send the team of six south to Miami Beach, with a pitstop in West Virginia to interview more of Condit’s relatives. The money would go toward field production, sound editing, cameras, insurance, RV rental costs, lodging and more.

Up until now everyone involved in the project has been working for free–Glover said they only recent received the grant money–and “that’s only sustainable for so long,” Danek says. “If we’re gonna hit the road for 10 days to two weeks and get out there, we’re gonna need some money.”

Beyond paying for their trip, Danek also wants to match a portion of the funds they raise to send Baltimore youth interested in working in science fields to STEM camp. He wants to name that fund after an orphan named Clyde Hafer, who was among those who wrote to Condit asking to come along for the ride to Venus.

“If we can change anything at all, with a younger mind in that high school level is probably where the target is,” Danek says. “To make a difference in the direction in their life… that would be huge.”

Even if the crowdfunding campaign doesn’t work out—it just may, given that one day in, the Indiegogo page has drawn more than $5,500—the filmmakers are hopeful the fundraiser will at least help get the word out there about their project.

“I wonder how big this could be, or whether, nationally, this is a story,” Danek says. “We don’t know. I feel like it’s just our job to uncover as much as we can and then let it go from there and see where it heads.”

This story has been updated to reflect that Danek hopes to match–rather than use–funds raised via the Indiegogo campaign to send students to STEM camp.